The role of air purifier to combat air pollution 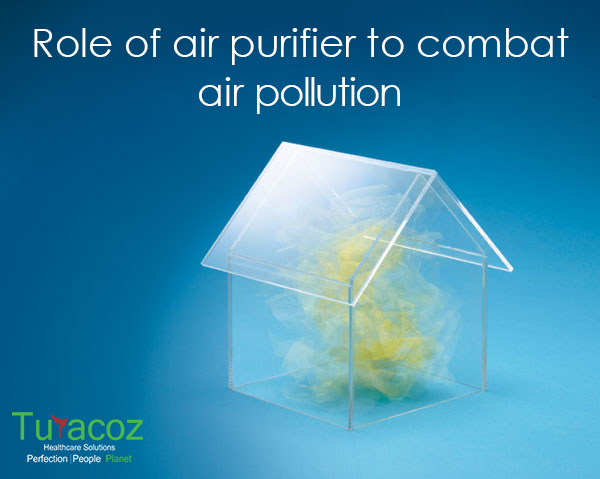 Air pollution is the introduction of chemicals, particulate matters or biological materials in air, for a sufficient time that causes harm or discomfort to humans or other living organisms or damages the natural environment. Clean air is considered as a basic requirement of human because it determines the health of the lungs as well as other organs. In order to extract 420 litres of oxygen that is crucial for human survival and function, a total of 10,000 litres of air enters the lungs every day. However, air pollution is continuously rising and responsible for significant threat to health worldwide. According to the World Health organization (WHO) report, around 7 million people died in 2012 as a result of air pollution exposure confirming that air pollution is now the world’s largest single environmental health risk.

There are different types of air pollutants, which affect the living organism as well as climate in different ways, depending on their specific properties and ultimately effect the living organisms. Air pollutants mainly consists of gas and particle contaminants that are present in the atmosphere. Gaseous pollutants includeSO2, NOx, ozone, carbon monoxide (CO), volatile organic compounds (VOCs), certain toxic air pollutants, and some gaseous forms of metals whereas particle pollution (PM2.5 and PM10) includes a mixture of compounds.

Various scientific studies have associated with air pollution to a number of health problems, which include: (1) diminished lung function; (2) precipitation of respiratory symptoms such as difficulty breathing and coughing; (3) worsening of respiratory and cardiovascular disease; (4) increased susceptibility to respiratory infections; (5) adverse effect on nervous system, including the brain, such as Intelligence quotient (IQ) loss and impacts on learning, memory, and behaviour; (6) cancer; and (7) premature death.

Currently available air purifiers usually have a multilayer filter system composed of a pre‑filter, a carbon filter, an antibacterial filter, and a HEPA (High-efficiency particulate arrestance) filter. The HEPA filters, which were traditionally used in hospitals, has indeed been a significant inclusion to home air purifiers. A HEPA filter uses mechanical filtration to remove airborne particles. A HEPA filter is standardized at a minimum 99.97% efficiency rating for removing particles greater than or equal to 0.3μm (1/83,000 of an inch) in diameter. This means that for every 10,000 particles that are 0.3μm in diameter, 3 will pass through the filter, and the rest will be trapped by the filter.

Although air pollution remains a worldwide epidemic and need multi-tiered prevention strategy, use of air filter which efficiently remove particulate matter, may result in significant health benefits to patients of asthma and cardiovascular disease. Besides, children, the elderly, and women will also be benefited, if indoor air quality is good because they spend more time in the home environment.

Related posts
Narcolepsy – a revelation
March 18, 2021
Pain and Recent Advances in Managing Pain
February 17, 2021
Staying fit while working from home
January 20, 2021
Working from home in pandemic: How yoga can be your best friend in this time?
June 20, 2020
Health Benefits of Nutraceuticals
September 19, 2019
Are you at the risk of Breast Cancer? Read this & find out.
October 18, 2018
Newsletter
Categories