mRNA Vaccine: From Class to Mass 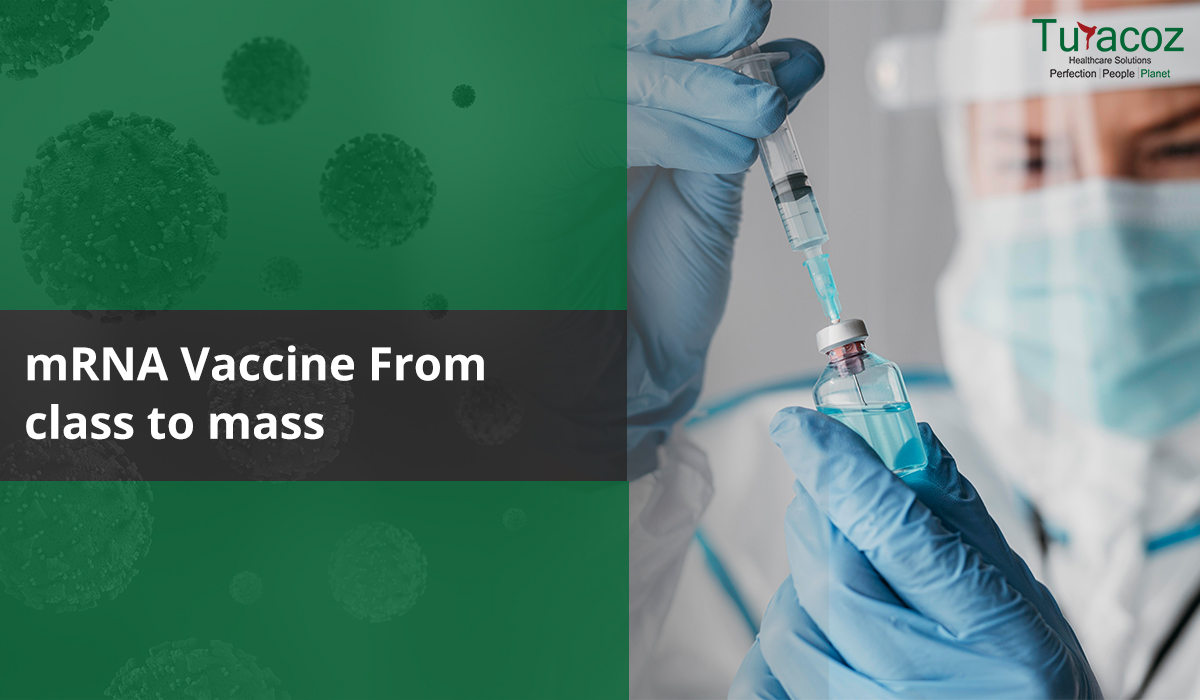 Coronavirus disease 2019(COVID-19) is giving the world a rollercoaster ride with shoot-up in infection cases globally. With more than 14 crores of infection cases worldwide in 16 months, the world is looking up to a miracle to stop this pandemic. One way of controlling the spread is to get vaccinated. More than 98 crores vaccines have been administered globally till the end of April 2021 and it is still making way to reach people in every corner of the world. India is in its second wave of COVID-19 infection with a tremendous rise in corona infection cases compared to the first wave of infection. But a positive side of this is, the largest vaccination drive of the world is under progress in India and giving positive hope for Indians to overcome this situation.

With COVID-19 a large number of research areas started to work on the war front to explore a possible cure, vaccine, a drug to treat COVID-19. Severe Acute Respiratory Syndrome Coronavirus 2 (SARS-CoV-2) is the disease-causing virus of COVID-19. The First case of COVID-19 was seen in Wuhan, China in 2019. With the increase in the number of cases globally, the World Health Organization (WHO) declared it as a pandemic. With 13 approved vaccines, more than 150 clinical trials, and pre-clinical trials globally every country is trying its best in exploring safe vaccines for the same. Along with traditional vaccines, new generation mRNA vaccines also jumped in this race. These mRNA vaccines are Messenger Ribonucleic acids vaccines.

WHAT ARE VACCINES AND WHY ARE THEY NEEDED?

A Vaccine is a product that triggers an immune response in our body and produces antibodies without causing the disease itself. So, when we face a real pathogen (Disease causing organism), our body is trained to produce immune defence against it and make antibodies and protect us from getting the disease.

Vaccines are developed for decades with traditional methods and few new methods have also emerged with time. The older methods included using the whole organism (Inactivated vaccine, Live attenuated vaccine, viral vector vaccine), a subunit vaccine (only a part of the pathogen is used) and a new method is using Genetic material (DNA or RNA vaccine)

mRNA vaccines are new generation vaccines wherein mRNA is used to produce the desired protein. It carries a message to the cell and produces protein. Once the protein is produced, the immune system produces antibodies against it. This feature of using mRNA is not a recent technology, it has been researched for its efficiency for use in therapeutics for the betterment of mankind. So, mRNA has now jumped from classroom studies to the mass population to show its safety and disease controlling ability.

A researcher Katalin Kariko explored the possible uses of mRNA in medical sciences, but she never got a grant for her work and was demoted from her position by a university. But that did not stop her to work. Along with an immunology professor Drew Weissman, she worked to understand immunological benefits by modification of mRNA and published their work through 2005. They modified mRNA to get an entry into the cell, this work was innovative. In 2010, Derrick Rossi and Robert Langer formed the biotech company Moderna, as they saw mRNA’s use for vaccine development and other therapeutic areas. By 2013, one more biotech company BioNTech came into existence looking upon immunotherapies using mRNA work done by Katalin and Weissman. Thus, a new era of pre-clinical testing of mRNA vaccine for various infectious diseases and cancer had already started. HIV, Malaria, Influenza, Rabies were few diseases that were considered to develop mRNA vaccines by preclinical testing in Mice and Non-human primates. But none of these could reach a stage from where it could be used in humans.

AND CAME THE COVID-19 PANDEMIC

At the end of 2019, when the world was busy planning to welcome 2020 in Wuhan, China people were getting infected by an unknown respiratory disease, which came out to be COVID-19 caused by SARS-CoV-2. This turned out to an outbreak globally in few days.

On 11 January 2020, the first-time genome sequence of SARS-CoV-2 was shared by the Chinese authority. This led to accelerated work by researchers globally for vaccine development. Pfizer/BioNTech vaccine immediately began their vaccine work. Phase I trials were started in April 2020, with required regulatory standards, followed by Phase II/III. On 2 December 2020, UK gave an emergency use approval for this vaccine. MHRA (Medicine and Healthcare products Regulatory Agency) of the UK became the first global medicines regulator to approve an RNA vaccine followed by various other nations also. Vaccine efficacy (is the percentage reduction of disease in a vaccinated group of people compared to an unvaccinated group, using the most favorable conditions) of more than 90% was seen so it was given EUA in many countries. The Pfizer/BioNTech BNT162b2 vaccine was based on the use of nucleoside-modified mRNA (modRNA) which encoded the spike protein found on the surface of the SARS-CoV-2 virus encapsulated in lipid nanoparticles.

A Similar mRNA work approach was seen by Moderna and NIH. Within two days they finalized their sequence for vaccine mRNA-1273.The first participant in the phase I study was dosed within 63 days of the sequence selection. Vaccine efficacy of more than 90% was seen in mRNA-1273. On 18 December 2020 USFDA authorized the Emergency use of the vaccine for individuals 18 years or older. Many countries after the USA, have given emergency use approval (EUA)for mRNA-1273 till today. Moderna vaccine mRNA-1273 is composed of nucleoside-modified mRNA (modRNA) encoding a spike protein of SARS-CoV-2, which is encapsulated in lipid nanoparticles.

FUTURE OF mRNA in VACCINES AND THERAPEUTIC AREA

With emerging variants of Coronavirus mRNA vaccines are showing protection against few new variants. Modified mRNA vaccines according to emerging variants are also being developed and studied by many companies worldwide. 6 more mRNA new vaccines are in pipeline, with one in India by Gennova Biopharmaceuticals Ltd in collaboration with HDT biotech, called HGC019. Animal studies have been done and now they are gearing up for Human Clinical Trials. Other vaccines are CureVac by GSK, MRT5500 by Sanofi and Translate Bio, PTX- COVID19-B by Providence therapeutics, one in under development in Thailand, and Pfizer/BioNTech are developing various modified mRNA vaccines.

With the development of mRNA vaccines, Science has reached the next level of advancement. But this comes with the pros and cons of the substance. The major con is Storage temperature; it requires very low degree storage and that is causing a problem in many countries for storage or transport globally, wherever it is essential. But with the Indian version HGC019, we are hoping this problem might get solved as it is claimed it is stable at 2-8°C. Pros consisted of short time to design and test mRNA vaccine, rapid and easy manufacturing compared to traditional vaccine.

mRNA is also considered to be used in mRNA-based therapies like protein replacement therapy in cardiology, oncology, pulmonary medicines, etc., and treatment of diseases. Hope this mRNA serves as a boon to the biotechnology industry and a golden substance for humankind.